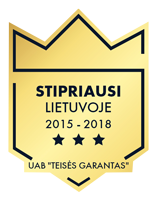 The most popular and reliable way to immigrate to European Union is getting residence permit in Lithuania on the basis of company set-up in Lithuania or purchase of the company in Lithuania.

As of January 2008 Lithuania has become the part of the Schengen Area, a group of more than twenty-five European countries which have abolished all border controls between each other. Since then the interim work and residence permittees of this country have the right to travel over Europe visa-free. Consequently, there has been a growing demand in company formation and immigration services in recent years.

Like in other European countries Lithuania has legislation that governs the terms and provisions of business immigration for the foreigners who are willing to set up an entity and therefore to be engaged in lawful business activity in the country.

The term business immigration refers to the formation of the company in Lithuania and obtaining a temporary residence permit that has to be revalidated each year within 5 year period till a person acquires permanent resident ship in Lithuania and correspondingly in Europe.

Furthermore, being a resident and a company owner a foreign person acquires the right to purchase immovable property and estate in land.